Promised an update with pictures yesterday so here they are.

First, the regular loaf of bread: 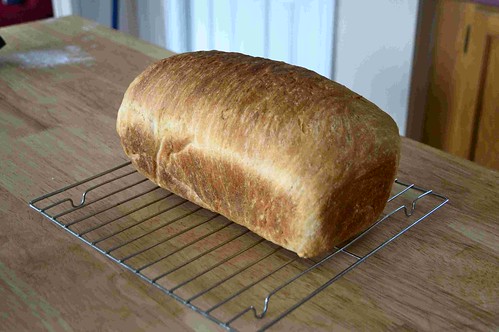 Next, the caraway rye loaf in the foreground: 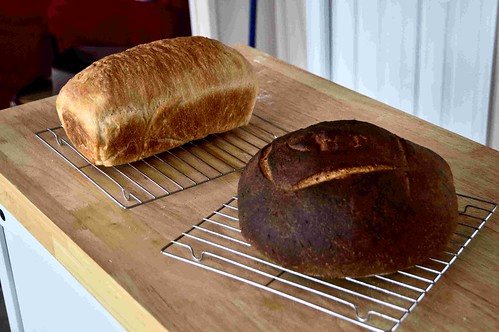 I used the recipe from this site. Next time I will be using a lower temperature then the one they recommended. 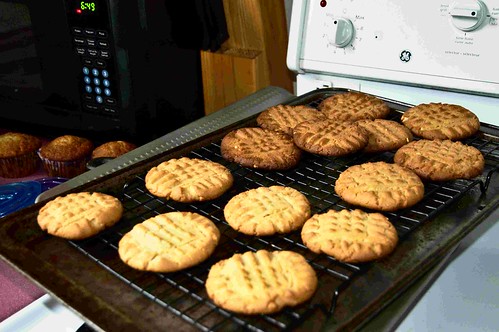 I really enjoy the baking process and it gives me a little bit to think things through and get some plotting done in my head.

As well, it gave me a little more quality time with my son. Get them started early with the cooking and eventually they will be able to do it themselves. 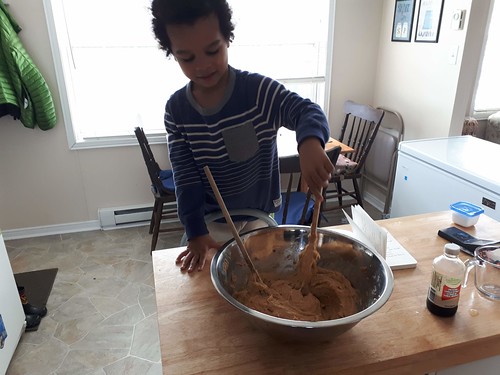 So, I guess I should get back to writing and stuff. Until next time.

Things aren’t easy being a single parent currently. The Squire (what I call my son on-line) is an interesting character. We are going through that annoying phase where he will only eat certain items. Thankfully grapes are one of them so he’s getting a fairly balanced diet considering. As well, he’s just starting to talk words and get some of his issues mentioned by him. Late talking runs in my family so it’s not really an issue.

So life and fun. Last week was a funny time though. We had gone to the local drop in for pre-schoolers that we have been going to for over two years now. He’s grown up with some of the other kids that go as well. This is not about that though, this is about after. One the way home we stopped at the local grocery store to pick up some sustenance for the two of us. Walk from their to our apartment and I get to the front door and realize that I had left my keys behind.  The weather is going through that phase where one day it’s winter, and the next it’s spring. I knew exactly where my keys were. The winter coat that I had worn the day before. Which was currently in the front hall closet behind two sets of locked doors.

Yes, we were locked out and lunchtime was thirty minutes away. Luckily I still had my phone. Called the landlord and explained the issue and was told thirty to forty minutes before he could get there to help us out. Understandable, he’s a busy man apparently. Building is small so there’s no superintendent on site either. Luckily it wasn’t raining or snowing, and the temperature was rather mild. Front of the building has a fenced in area and a park bench so the Squire was playing around while waiting.

One of the items I had picked up was a bag of two bite brownies as a treat for the two of us. Got his attention and told him to sit down on the bench which he did with enthusiasm. Opened the grocery bag and pulled out the bag of brownies. He  sees it and his eyes light up. He points to it and in a questioning voice goes, “Cookie?”

Yes, cookie is one of his words. I open the bag and hand him one brownie which he gobbles down in no time. I give him one more which disappears into the maw that can only belong to a toddler. He’s smacking his lips and I put the bag of brownies away.

Well he leans back and lifts his head up to the sky and howls like the world is coming to an end, “Coooookkkkkiiiieeeeee.” Much wailing and gnashing of teeth as the great tall daddy has denied him his rightful spoils. He sobbed for a bit and complained to Brown Bear, who he had dragged along with him that day for the adventure of course. I tried my best to ignore him. Carefully moving the grocery bag out of his reach every time he tried to grab it. Yes I can be a cruel man at times. At least I wasn’t eating them in front of him while denying him his dues.

Landlord arrived after about forty minutes and inside we went. Got him out of his coat and boots and started lunch. No more brownies until the next day. I don’t think I would have been able to handle a toddler hopped up on sugar and chocolate.

I think, next time, I will discuss why I think he’s part cat. Seriously….